DTASC Goes Live and Peninsula Drama Wins Big
Saturday April 23 was another milestone in the return to normalcy as the Drama Teachers' Association of Southern California (DTASC) hosted their first live festival since November of 2019 at Royal Oak Middle School.
The Varsity Division festival saw our Drama 2 and 3/4 Advanced students competing against 22 other schools in five technical theater and 7 acting categories, and the students of Peninsula Drama found some great success.
Our entry in Small Open Drama was a semi-finalist (Director: Prudence Bhattarai, featuring Christian Downs, Stella Lenzie, Jack Pratley). Reaching the Finals, Elena Fischer received an Honorable Mention award for her entry in the Audition Monologue category.
Elsewhere we earned 5th place in the World Court Costume Design category (Siena Funiciello, Angelina Lakis & Bela Osorio), 4th place in Set Design (Simon Ackermann, Andrew Peters & Chloe Sohngen), Large Group A Midsummer Night's Dream (Zaria Ackermann, James Callaghan, Megan Cherry, Athena Crescibene, Colin Hassett, Maddy Magana; Directed by Tiffany Arita) and the musical category - Music by David Bowie, Words by Shakespeare (Stella Cortese, Melody Dominguez, Gabby Hoffman, Grecia Merino-Cornejo, Sydney Miller, Cole Moore, Jacob Pascover & Soomin Sun; Directed by Grecia Merino-Cornejo).
3rd Place finishes in Lighting Design (Melanie Flores, Mark Fraley, Kai Rinzler & Iris O’Connor),  Character Costume Design (Angela Hoffmann, Paul Kerker & Delaney O’Connor), Open History (Jessica Doty, Bethany Vetchtein, Rikki Walker; Directed by Aaron Byrnes) and Large Group Romeo & Juliet (Juliette Belke, Emily Feigle, Alison King, Maya Locano, Erica Tsuei; directed by Alison King). 2nd place trophies were earned by Graphics and Publicity Design (Ashley Gomez, Kayla Law & Ben Leet), and the Original Scene - Shakespeare Play in Modern Day Category (Evalynn Castro, Julia Doty, Cheyenne Grenda, William Kelly; directed by Trenton Sakamoto).
Overall, Peninsula Drama ranked 3rd in Sweepstakes, based on total earned points across all competition categories. A very exciting and successful return to live theater festivals indeed.
An Inspector Called and Peninsula Drama Answered (December 2021)
Peninsula Drama's Fall play, An Inspector Calls by J.B. Priestley opened to rave reviews as Peninsula Drama made their return to the stage, hosting audiences in the PAC for the first time since the early closure of Freaky Friday in March of 2020. Audiences were blown away by the power of the performances from both casts of this double-cast production, and they were equally taken aback by the work of our stage crew who were able to effectively whisk us into Northern England in the early 20th century. Between the beautiful set, production designs, costumes and hair and the support of impeccable lighting and sound design, we were transported into the home of the Birlings.
High praise came from the California Educational Theatre Association (CETA) as their set of adjudicators came to pass judgement on our production. Though Peninsula Drama's production did not finish as a top-3 production LA Country (8 out of 24 schools) based on scores, a handful of our students were singled out for exceptional work.
One judge wrote, "The acting is top-notch. The directing is deeply emotional and evocative. The technical elements are mostly superb." and another commented, "The technical design was simple and purposeful, the directorial stage pictures were well thought-out and subtly enhanced themes repetitiously, and the ferocious momentum found during peaks of the play made by the cast was stunning to behold." 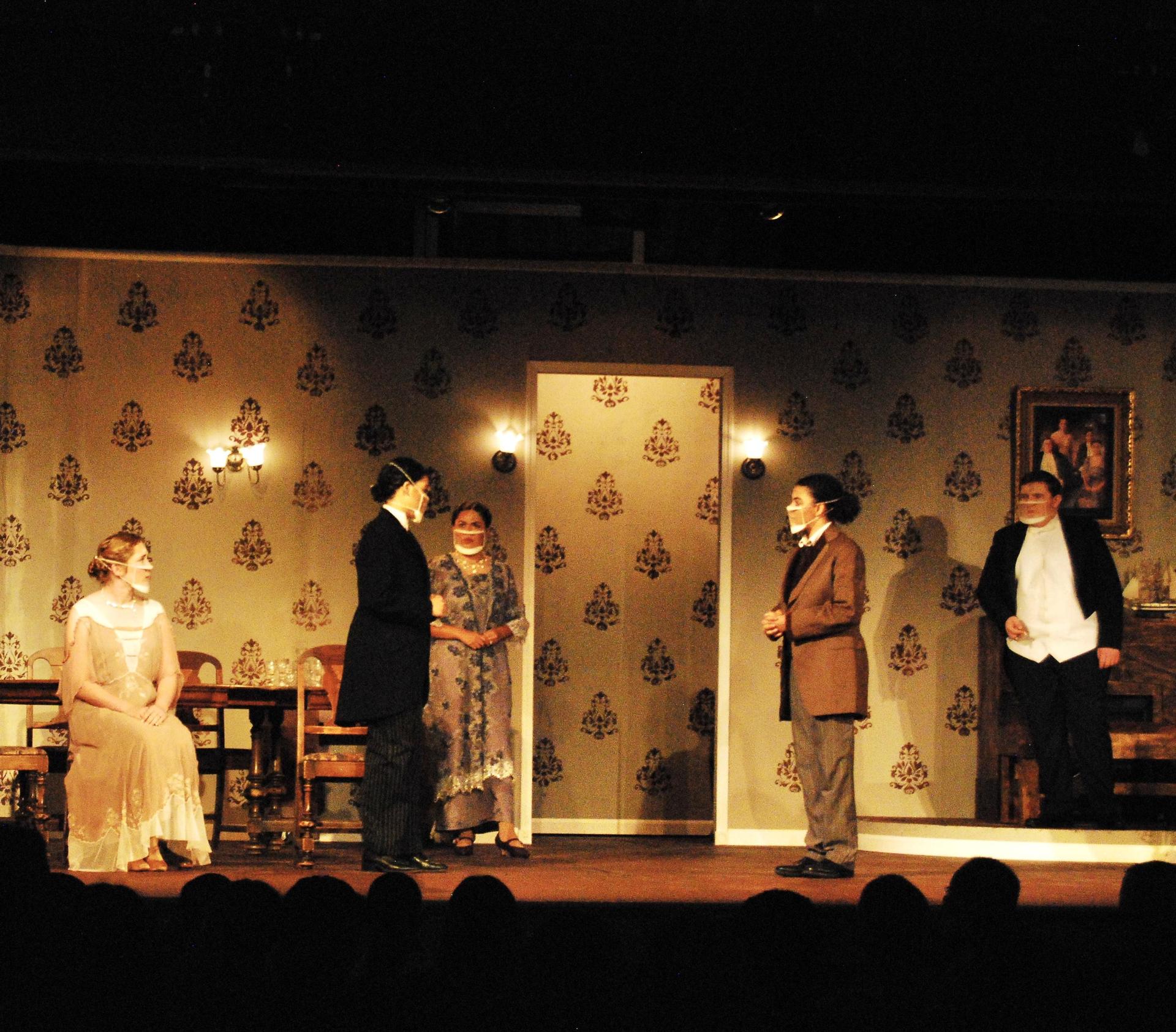 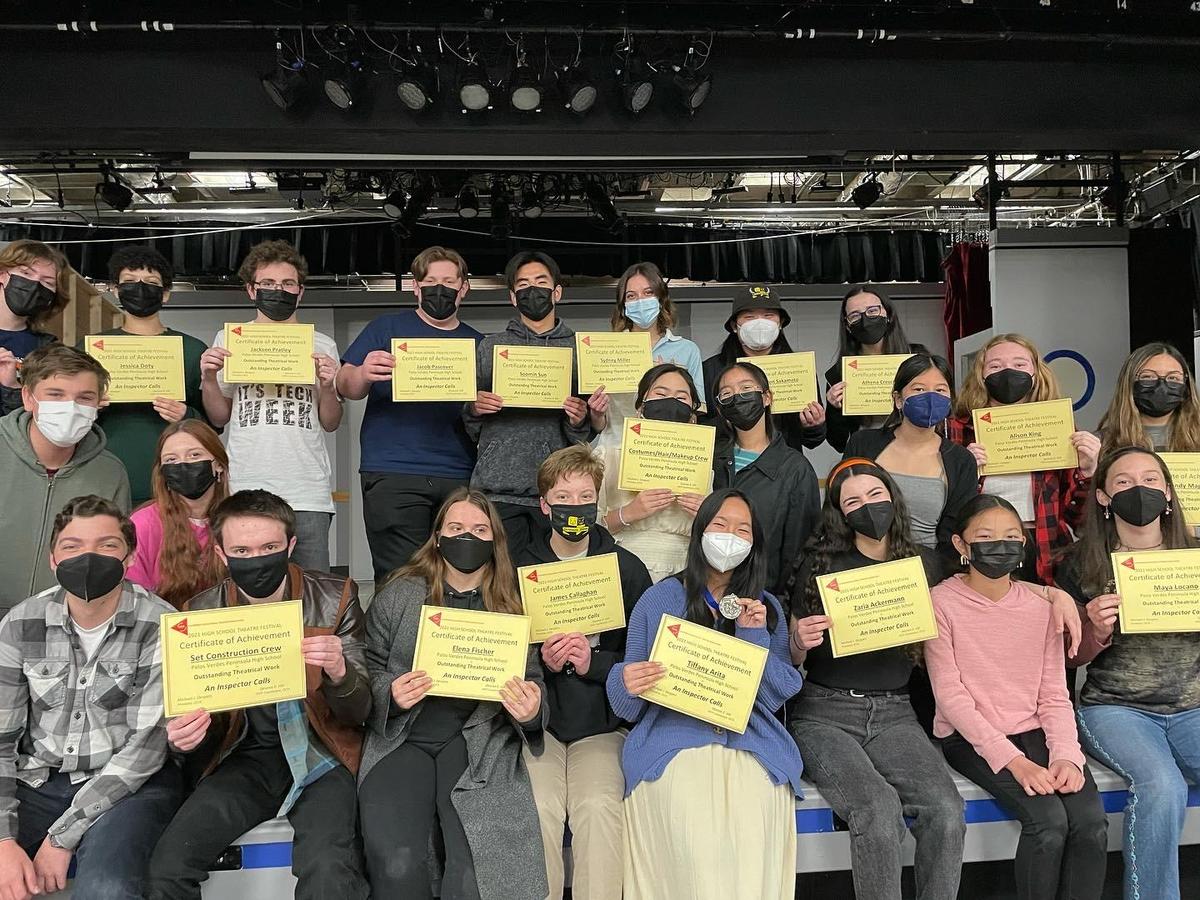 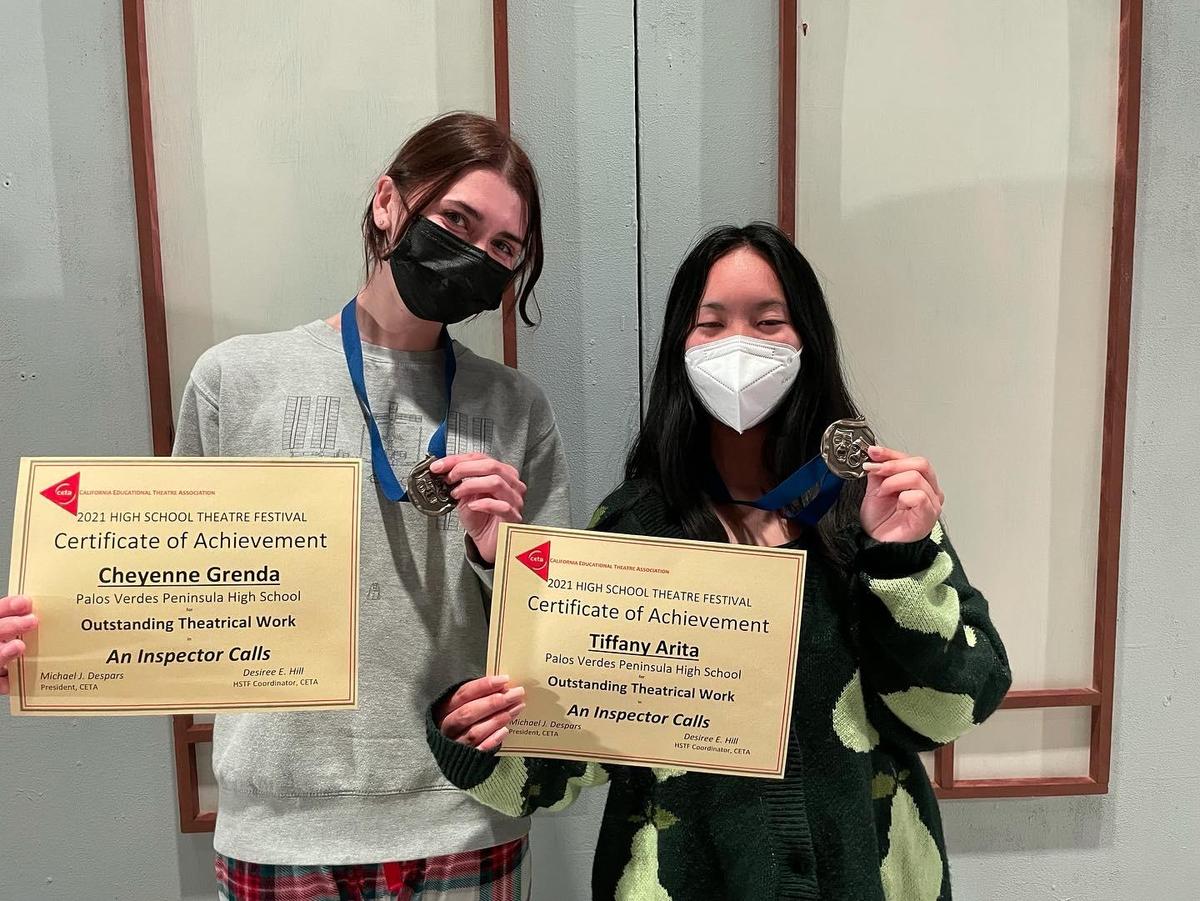 At the Fall 2021 Drama Teachers’ Association of Southern California (DTASC) Festivals our Drama 1 Advanced students competed in the Junior Varsity Division (directed by our Drama 3/4 class) and the students in Drama 3/4 competed at the Varsity level.

Congratulations to all of our performers and designers. All of their entries will be available to view on the Drama Department’s Vimeo page by the end of the week (November 20). 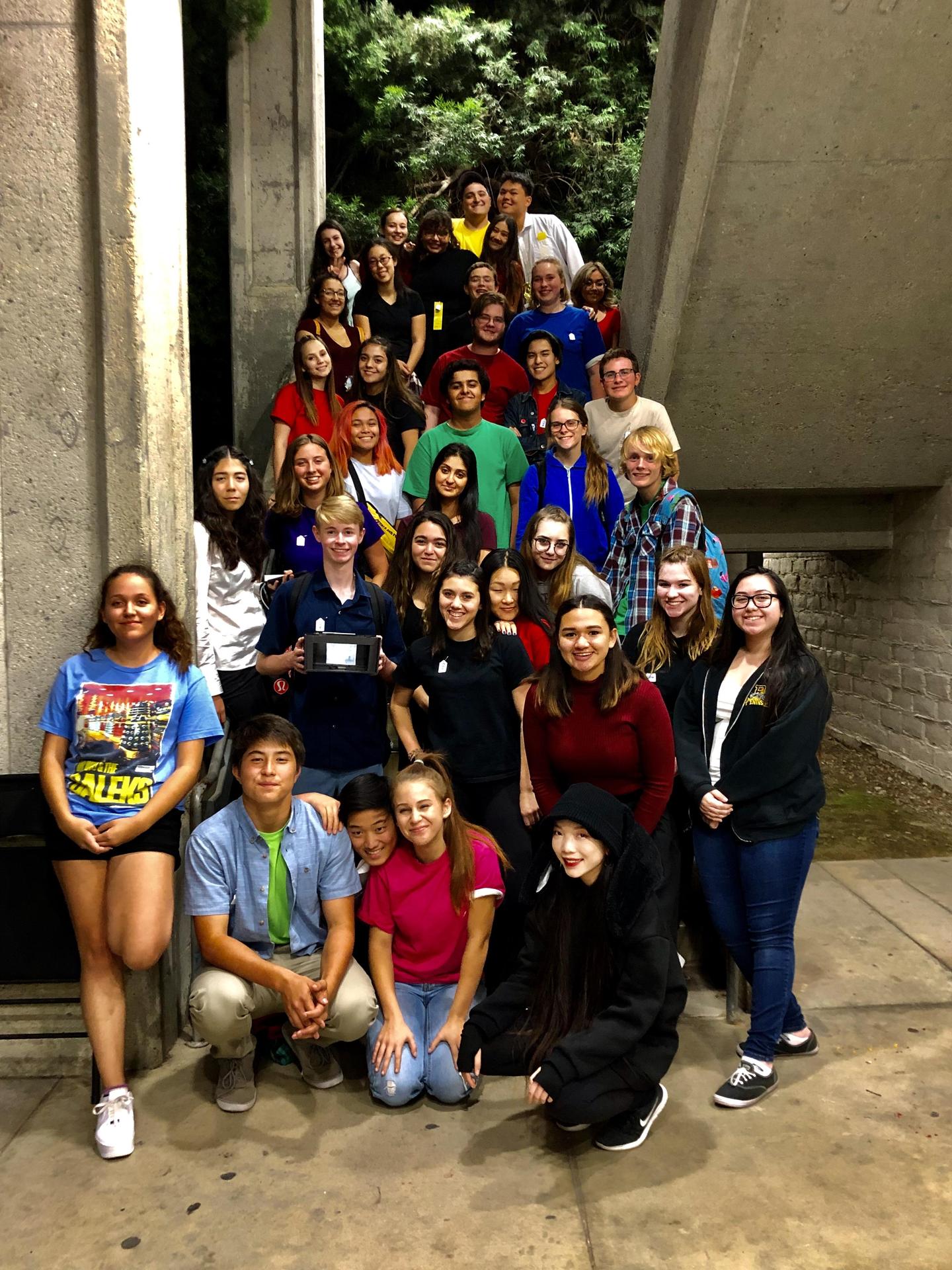 At the Junior Varsity competition, all of our entries reached the final round.

2nd Place – A Woman’s Voice (Dominic Ebilane & Allison King; Directed by Emma Cool & Kylie Young). Overall, PV Peninsula placed 6th in Sweepstakes, thanks to the strong showing from all of their groups, despite competing against schools who were entered in at least seven of the nine competition categories at the Junior Varsity Division.

An exciting Fall competition season comes to a close for Peninsula Drama, and they are looking forward to continued success at April’s DTASC Shakespeare Festivals.

The three day weekend festival offers a variety of events for theater students from all over California including workshops led by professionals in the industry.

Students enjoyed several performances and took advantage of the wide variety of theater opportunities. Congratulations to Peninsula High senior, Rachel Edelstein on earning one of five senior scholarships awarded during the weekend among 96 auditioners. Peninsula Drama also earned 2nd place in the Film Trailer competition for their entry from She Kills Monsters (Produced by Chloe Green, Sydney Miller & Kaito Suzuki).

Many other students involved in our Fall productions also earned Certificates of Merit from CETA Adjudicators for their efforts:

For She Kills Monsters 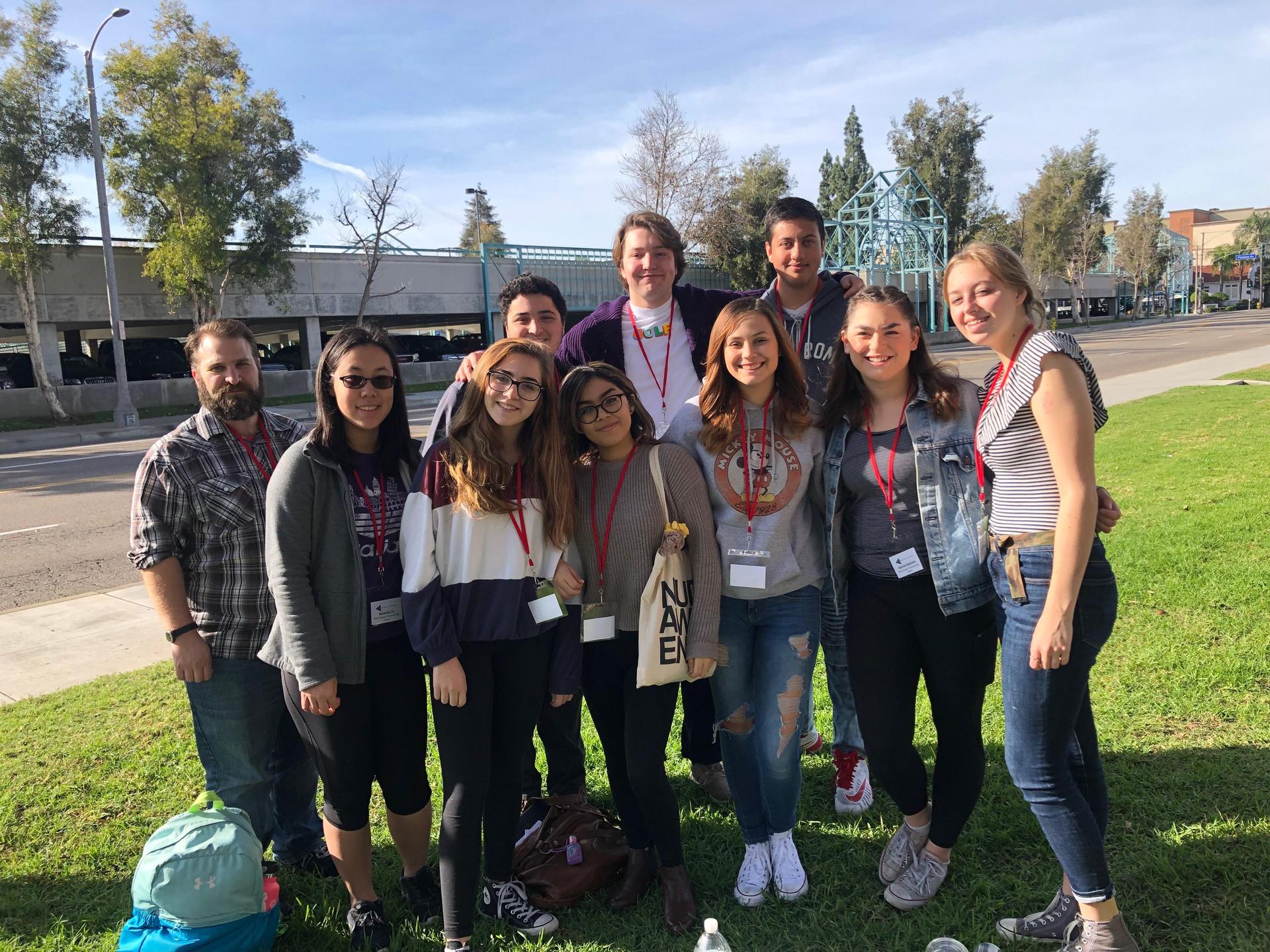 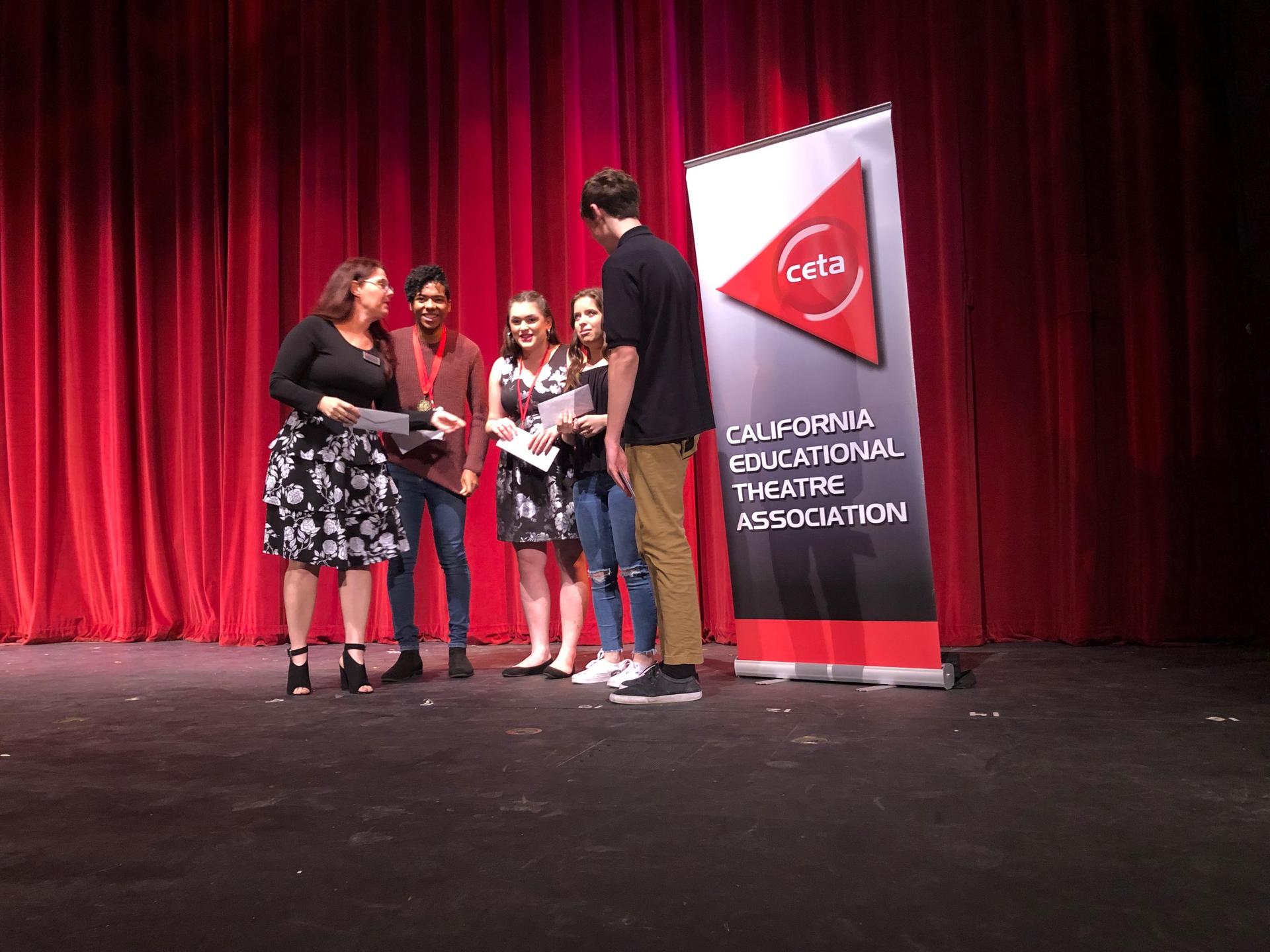 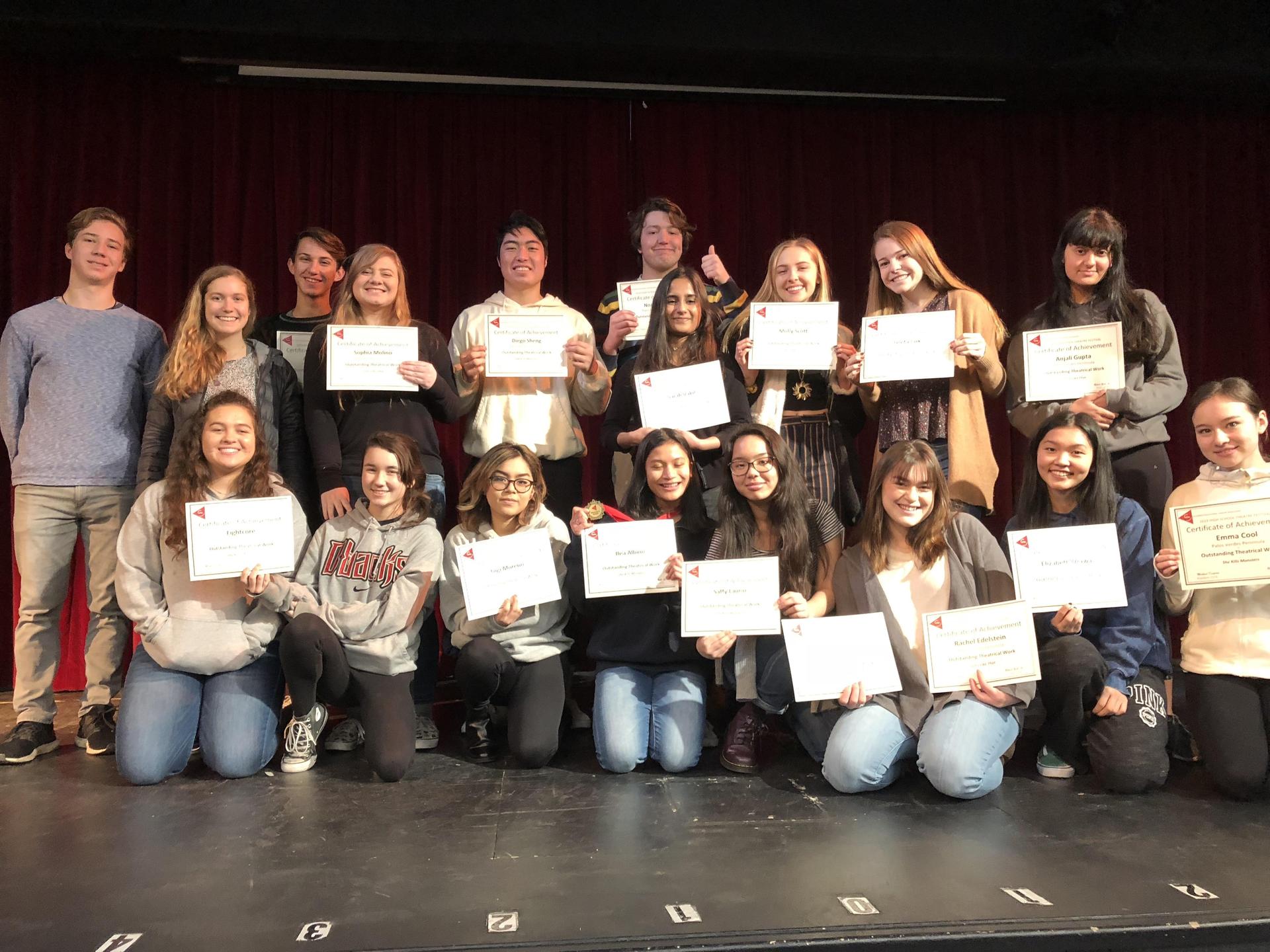 This past weekend wrapped up a successful Fall competition season for Peninsula Drama where they entered the Drama Teacher’s Association of Southern California’s (DTASC) 77th Annual Fall Festival.

At the DTASC Varsity Division, competing against 67 other high schools, Peninsula Drama’s Drama 3/4 Advanced students reached the semi-finals in all acting categories. Our lone finalist entry, Rachel Edelstein, earned 5th place out of 101 entries in the Audition Monologue category .

Our 9th graders in Drama I Advanced (directed by members of Drama 3/4) competed against 30 other schools at the Junior Varsity competition and had an amazing day! All of our groups made the final round and brought home some hardware. The results:

All of that individual and group success added up as Peninsula High School took home 1st place in Sweepstakes, based on points accumulated in all categories throughout the day. Congratulations to our competitors at both divisions.

All this success earned PVPHS 9th place overall out of 75 competing schools.

The Drama Department was competing again, this time with the Drama I Advanced class at the Junior Varsity DTASC competition on November 4. This time around, all of our entrants made their way to the final round.

12th grader Ryan Axberg (Igor in the Spring Musical Young Frankenstein) was chosen as one five recipients of the Musical Theatre West annual Footlighters scholarships. Ryan and the other scholarship winners were honored on Saturday, March 21 at MTW's 'Music in the Morning' event which featured performances by all the scholarship winners. In all, Musical Theatre West selected 10 outstanding high school juniors and seniors out of 43 applicants from all over Southern California.
CALIFORNIA YOUTH IN THEATER DAY 2015
Senior Brianna Bowers participates in California Youth In Theatre Day, 2015
On March 17, 2015, over two hundred Theatre students, theatre educators and administrators from schools all over California gathered at the state capitol to 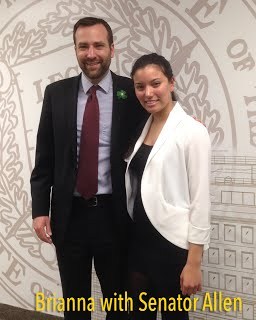 breakfast with legislators and legislative aides. During the past twelve years over two thousand students and teachers have participated in this statewide event. Brianna, along with prize-winning Theatre students were invited to perform at the California Department of Health during the 18th Annual CYIT. Brianna earned her invitation based upon her senior scholarship auditions at January’s CETA Theatre Festival.

The Governor and the Legislature of California declared March 17, 2015, as California Youth in Theatre Day. The Legislative Resolution by the Senator Hannah-Beth Jackson states that “Whereas these students are the future of the arts and entertainment business of the twenty-first century; and Whereas, by succeeding in theatre, the students learn the art of creative endeavors with assurance; and Whereas, their success in theatre lead to enhance job esteem and cultural appreciation, therefore, it is declared that March 17, 2015, is CALIFORNIA YOUTH IN THEATRE DAY, and extends highest compliments to the student performers and their teachers, and parents on their accomplishments and their promise.”

Brianna and Mr. Cohen met with our local legislators, Assembly-member David Hadley and Senator Ben Allen, in addition to her performance at the event. And spoke with them about the importance of arts in education and government’s need to continue to support the arts and education as a whole. Congratulations Brianna!